Me Valentine and Me

Stole this from Farmer's Daughter, who stole it from Dooce, I know I don't usually post personal things in my blogs, but I've been thinking of changing my ways.

Me and My Valentine

What are your middle names?
My parents felt my name was too long already and never gave me a middle name, but Octav's middle name is Adrian, after his father.

How long have you been together?
It will be eight years in May, seems so long.

How long did you know each other before you started dating?
We were in the same french class for 6 months, although I don't remember him. And then we worked together on our high school paper, he did the layout of my section, so we became fast friends, and within a few months became inseparable.

Who asked whom out?
Well he asked me, but we had been a couple for a month at that point, so I'm pretty sure he knew he wouldnt get rejected.

Whose siblings do you see the most?
Octav only has a half sister, I have never met, and he's never met my half sister, so my sister would be the front runner.

Which situation is the hardest on you as a couple?
The distance, we're apart most of the time, because he's usually at university.

Did you go to the same school?
The same high school, but different universities, I went in California, whereas he went in the UK.

Are you from the same home town?
Not even the same country.

Who is smarter?
He's smarter, I like em really smart.

Who is the most sensitive?
I don't think one of us can really claim that title, we're both pretty sensitive.

Where do you eat out most as a couple?
We're one of those annoying people that have been to Hard Rock Cafe in almost every city we've been to, and I think its safe to say that is the front runner.

Where is the furthest you two have traveled together as a couple?
We have done a lot of traveling, the furthest north we've been together is Scotland, the furthest south is Cyprus (where we were going to boarding school when we meet, though we did visit it this summer so it counts.)

Who has the worst temper?
I do, though I'm mostly pretty mellow

Who does the cooking?
I do, but he pushes me aside if meat is involved.

Who is the neat-freak?
He is, I try for his sake, but he naturally is neat, whereas I'm naturally a tornado.

Who is more stubborn?
He is, I thought I was stubborn, til I met him.

Who hogs the bed?
Well since I'm writing this I get to say he is, though he would probably disagree. He hogs the covers, but he says I only sleep in the center of the bed. (I do not.)

Who wakes up earlier?
I do, I have the ability to fall asleep again, but after I have moved to the center of the bed. (oh, that may be why he thinks I sleep in the center.)

Where was your first date? Pizza Inn, and then a walk in the park that used to be a river in old town Nicosia.

Who is more jealous?
I am, I dont like any of his friends who are girls.

How long did it take to get serious?
A couple of years, we broke up for a while, and his request and after 6 months suddenly asked me to tour Italy with him, even if we were just going to be friends. We havent been just anything since that day.

Who eats more?
Well he's been a starving student longer periods of time than I have, so I do.

Who does the laundry?
He doesnt let me do his, but I have a couple of times.

Who drives when you are together?
We're not really driving people, and in fact have never driven each other, unless you count some rides at Euro Disney with fake wheels. Though we are both licensed, and I even own an old beat up thing that was once a car. He's a walker and loves trains, and I'm somewhat obessed with public transport.

I don't have a photo with me. :( We didnt own digital cameras back then. But if I ever find myself in front of scanner that works...
at February 23, 2009 No comments:

Better than Sex Cake for Discussing a Zombie Love Affair

1 small can crushed pineapple in juice

1 cup whipped cream, with a tablespoon of powered sugar

Place cake on pedestal, top with pineapple and allow it to soak for an hour, top with pudding, then whipped cream, and toasted coconut. Taste and discuss.
at February 12, 2009 No comments:

Boil the dried apricots in water, til partially rehydrated, drain and process them with small food processor, add the mustard. Spread mixture on chicken breasts and bake at 400 for 30 minutes.
at February 11, 2009 No comments:

i package Pasta Shells, boiled, drained and tossed with a little olive oil

half a package frozen spinach, defrosted and drained

pour some sauce on the bottom of baking dish, stuff shells with mixture, line up in dish, and top with more sauce. Bake at 350 for half an hour and serve warm, with a little mozzarella on top

To be a little different, add some mushrooms to the sauce.
at February 10, 2009 No comments:

Marmalade and a Zombie Affair

This dessert hails from the arab world, on a large glass platter the oranges sparkle.

Remove peel and pith (skin) of oranges with a knife, cut into 1/4 in. circles. Warm marmalade in a small pot on medium heat till warm. Place orange circles on serving plate.  Top with marmalade.

This dish is light and very refreshing, plue naturally fat free. You can do this with any fruit you like, but oranges are traditional, you can use the peel to make your own marmalade, but eh.
at February 09, 2009 No comments:

A Zombie Love Affair with Kids and Chocolate

A valentines treat kids can help with, no bake chocolate truffles

Have kids measure and pour cheese, sugar, and coco into a bowl, then have them mix it, (first with spoons, then with hands and finally with feet, rinse child off in sick afterwards.) Then roll into small balls, the size will vary, but no bigger than a tablespoon in general. You can refrigerated for an hour or so if they're too soft. But the great thing about this is you can eat it straight up, instant gratification.
at February 06, 2009 No comments:

Eggs in a Basket for Valentines 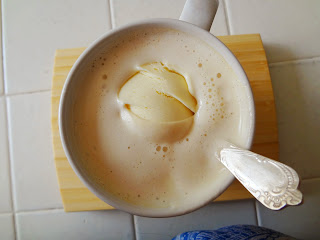 Honestly I don't drink coffee. I told my bf years ago that if he gave up alcohol, (which I dont drink), I'd give up coffee, (which he doesn't drink.) Well if you know anything about couple only half the arrangement worked out, my half although once in a while I make an exception, once every few months or so. This recipe combines the two and is my favorite exception.

For lovers who are also friends.

Divide everything into your favorite coffee cups, and enjoy.
at February 04, 2009 No comments:

A Zombie Love Affair, Turkey Paninis and an indoor Picnic

a long crusty bread, cut in half and split

Spread mayo and pesto on opposing sides of the bread, fill with turkey and provolone. Grill, (use the Foreman, if you hve one) if you sont you may need to get creative, with brick and frying pans.) Once the cheese has melted, force open fill with avocado, (its in season, yay) and arugula. Slice in half and serve on picnic ware by your favorite window.

Arugula and mushroom salad on the side

Toss all together before serving
at February 03, 2009 No comments:

Part Deux: A Zombie Love Affair, a series of recipes for valentines

Beat egg whites with electric mixter until stiff.
Add sugar in small increments, mixing after each spoonful, add the lemon juice at the end.
Show the love by stirring in by hand the Lavender and the coconut.

Bake at 325  for around 15 minutes. they will still be light in color.

A Zombie Love Affair, a series of recipes for valentines

Nutella Crescents - Oozing nutella in a bit of dough, the perfect bite of goodness for valentines morning, plus easy enough to manage by getting up a half hour earlier.

Preheat the oven to 350, line a baking sheet (lighter color one is best). Seperate the crescant dough from one another, place a half a tsp of nutella at the base of the triangular pieces of dough, and roll the dough and form a crescant shape, you want the tip to be underneath. Bake for around 20 minutes, until you get a nice golden color, (be adventurous take it a minute further). Use the scent to tempt others, but don't bite into right away, wait for it to cool a little.
at February 01, 2009 No comments: