on September 10, 2012
I'm back, available for blogging and everything, I promised you the foods of Cyprus and Greece, here's the thing, the food in Greece is going to be very disappointing. but let's start with Cyprus, I've spent literally years there, so I know the food rather well by this point, there's three basic food types, seafood and it's fixin's, lamb and it's fixin's and cheese. Ok so it's basically one cheese, but it's one of the most unique cheeses in the world, and Cyprus' most famous export, so it gets a mention. Let's start with the cheese. Haloomi, I've cooked with on the blog, my grandmother loves cheese, it's included at the end of every meal, and is the star of breakfast. 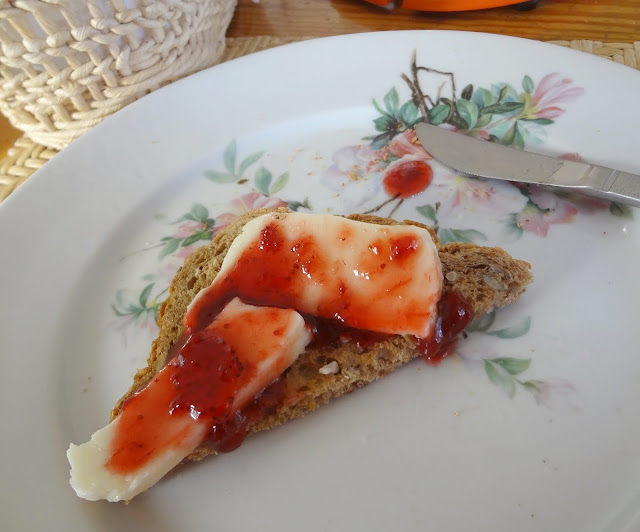 Here it is, it is folded once and therefore has a natural split, there is the village version, and the supermarket version, and this may sound really odd coming from me, but I prefer the mass market kind, it's a lot less salty, and softer.
The jam is strawberry and homemade, my grandmother made it, and while it photographs great, I prefer the apricot, (homemade by one of her friends) I actually don't like strawberry jam, a sin for many I know.
Did you notice the knife? Does it look kind of familiar? My grandparents spent their entire lives travelling, (six Continents)  and my grandmother loved the airplane silverware. So she took a few, or well.... 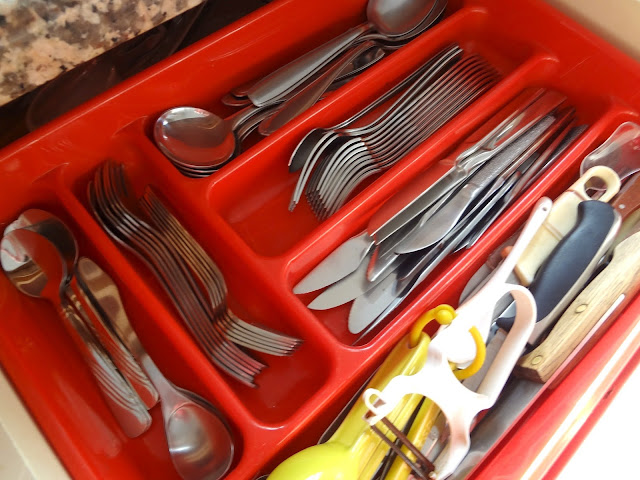 Ok onto the Cyprus traditional lamb meal, kleftiko, slowly cooked in clay pots, it falls apart, I don't like lamb, but good kleftiko loses all that gamey flavor of the fat and becomes just really good meat. 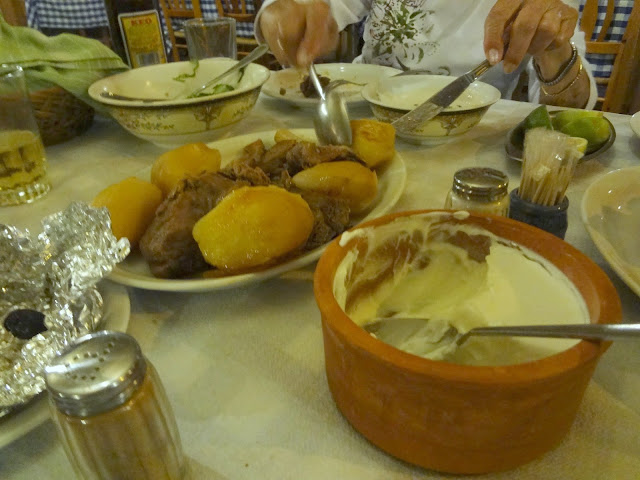 The clay pot in the forefront is yogurt, traditionally made in Cyprus with at least some sheep milk, which is the best tasting yogurt, you have to like it sour and creamy, but it is so good, the imported Greek yogurt has nothing on this.
There's slao slow cooked chicken. 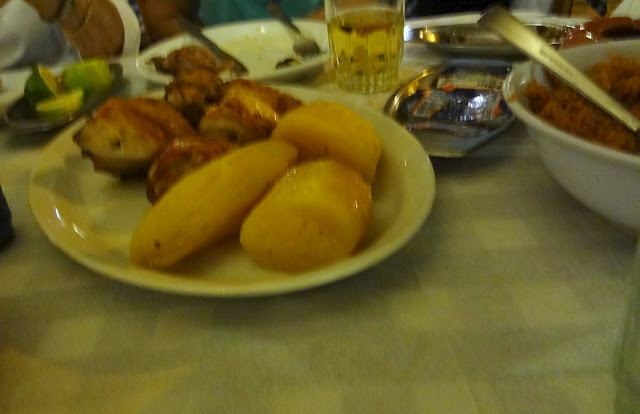 Whole potatoes, potatoes in Cyprus are so good I didn't eat them for years after I moved back, so good, in the corner, there's bulgur cooked with tomatoes.
Here's a better shot. 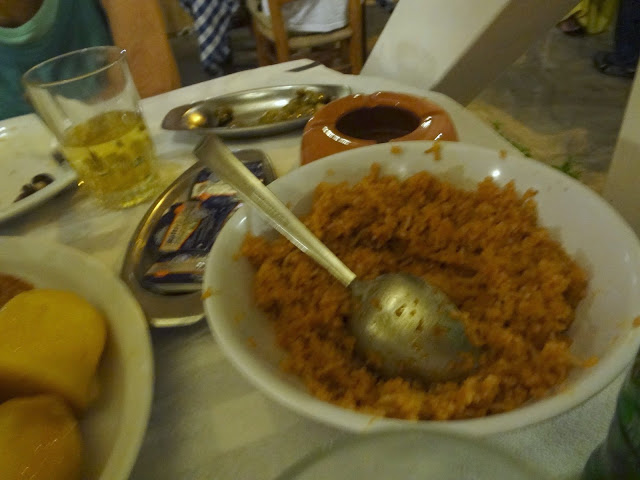 The best food though in Cyprus is fish, I only had it once, once, drove me crazy not going in Greece, next time I'm going to insist on eating daily, cause honestly, so good.

You pick your own fish.

Then go pick a seat outside, on the beach. 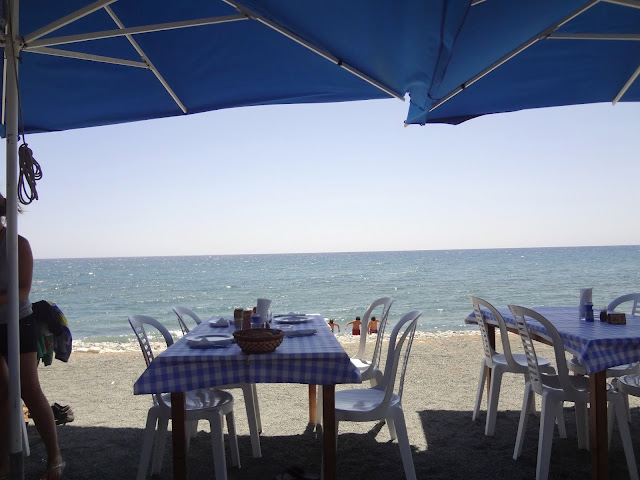 They bring our appetizers 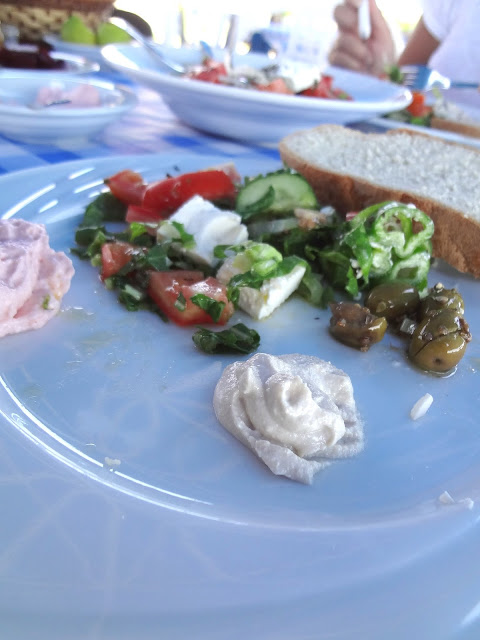 Which are already so good, this is greek salad, marinated olives. tahini, and tarama (which is made with carp roe)

Then the fish come out. 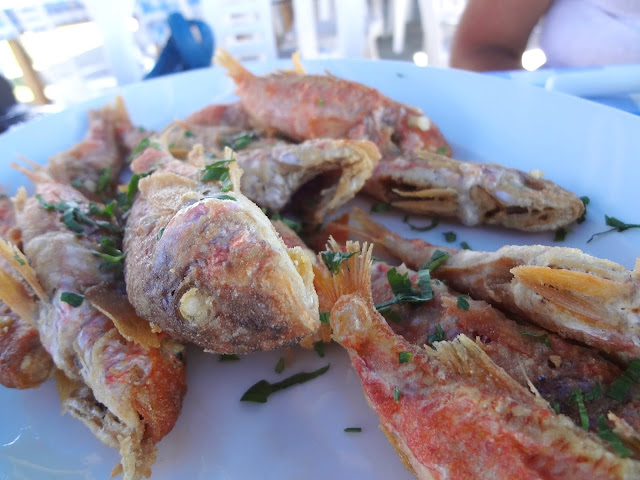 These are red mallet, they are around 6in long, and are fried, a little too big to eat the bones, (some fish are small enough to) and I take off the head, but on the smaller ones in the tails are crunchy goodness.

Then the main course 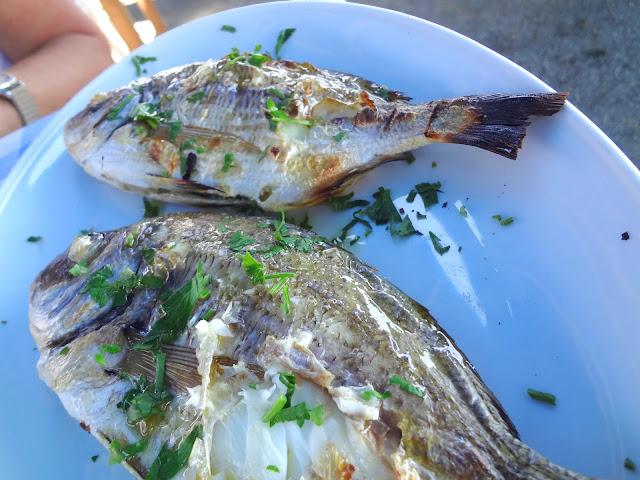 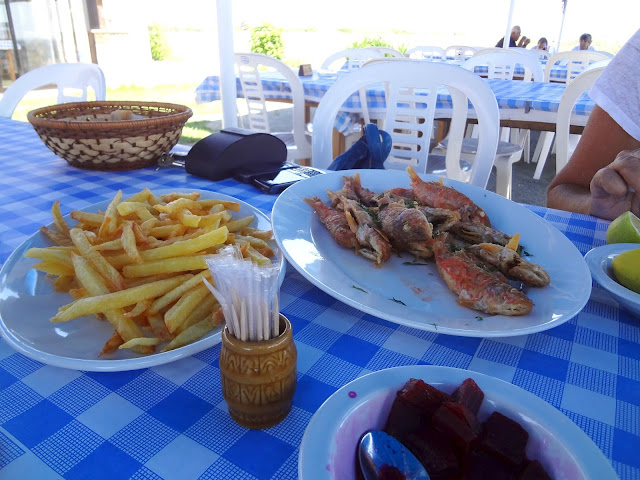 At the end they bring out some fruit. Figs and cactus fruit. 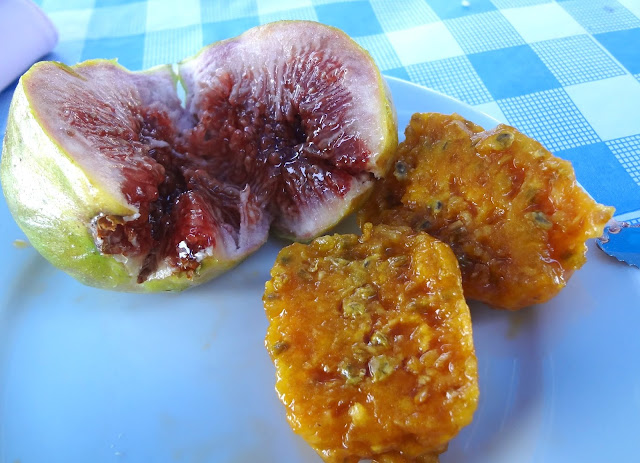 Sadly no calamari this trip, although that sin is no longer what it once was, it used to be that it was so bad in the US and so good in Cyprus, it was sin not to consume it, but globalization has changed that, Cyprus now sometimes serves frozen calamari, and a few restaurants in the US finally learned how to cook it so it's almost the soft texture you could once only find around the Mediterranean.