on May 02, 2012
There are some adventures in live you cannot really explain, I was lucky enough to live in one for 4 years, this summer one of my best friends from high school gets married. Which means I get to go half way across the world, see a bunch of people I really love, and never see all at once. All that is making me think of the years I spent there, with them.

Let me explain further I went to a small boarding school on the island of Cyprus, which is in the Mediterranean, the school was Armenian, the school system was British, the locals all spoke Greek, and there were only 18 people in my graduating class. Which meant we not only knew each other rather well, we knew almost everyone else as well, and had a full on blooming society. Everyone had nicknames, we had words that only we used, there were students from 30 different countries, over the course of the 4 years I was there, mos of them were European, middle eastern countries, Americans were rare, and often bundled with Canadians and our token South American student. Our society also had it's own food, Now remember we were mostly teenagers, eating boarding school food, so anything not made by the cafeteria was considered rather tasty to us. So some of these gem dishes are just not something I would ever eat again. (This includes topping salty cheese with salted spices, and using instant ramen spice packs as seasoning.) But there is one great one, one truly remarkable one, no one would believe is any good sandwich, it's so simple, and yet. 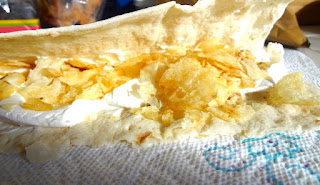 Potato Chip Sandwich
Potato Chips (flavor of choice)
Yogurt, the thicker the better, in fact I often use strained
Bread, we used to use something like a hot dog buns in high school, but any bread works
Sugar (optional)

The sugar really wasn't for everyone and worked better with some kind of chips vs. other. There was this peanut flavored chip that really did well with sugar, as did salted chips, but salt + vinegar chips, bbq chips, cheese and onion chips, sugar would have been a step in the wrong direction.

I feel this sort of addresses the problem with chips and dip, chips need to not have any flavor to support a dip, but then, the dip flavors are often flavors available on chips, so there's a huge variety of chips that are served almost only ever stag. Doesn't seem fair, does it?
boarding school Bread chips dip easy food high school quick recipe Sandwich yogurt