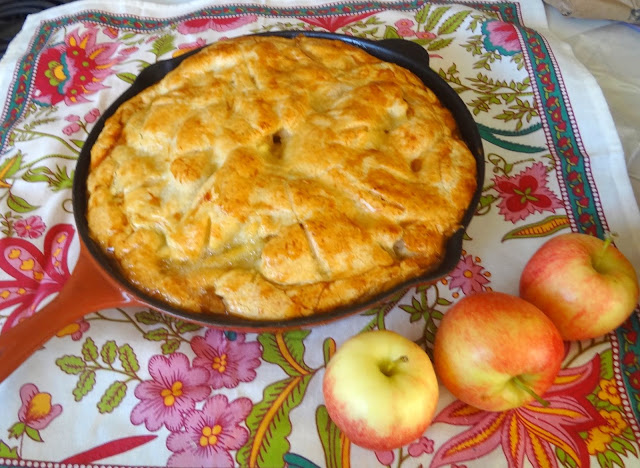 I miss apples, I mean summer fruit is great, I love peaches, and not finding any at the market this week was very disappointing, (I would like to make one more peach cobbler this year, especially since the last one has horrible nighttime photos) But apples, all red and pretty and there are so many great apple desserts, so much more than with other fruits. 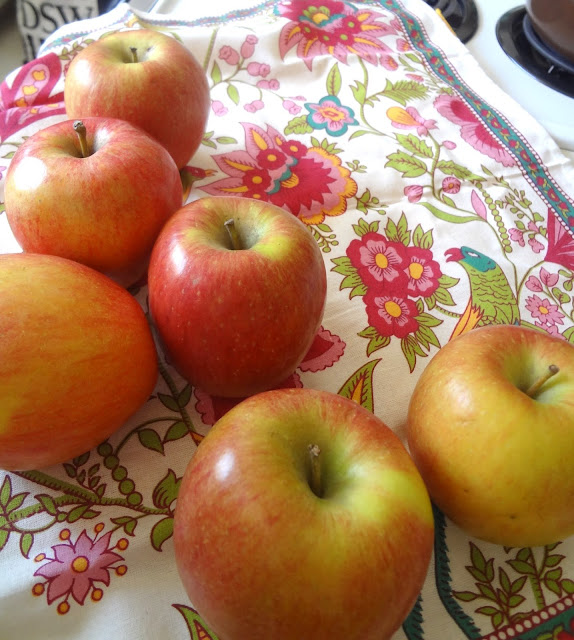 There had been talk of a picnic, and while I never make pies for picnics (for one really persuasive reason) I just wanted to more than I had control over, so pie it was.

There are two things about pie that bug me and they both concern the crust. First I don't make it, it's annoying, gets a huge machine dirty and then expects you to wash it, like you have nothing better to do with your time, plus it sticks and wants a roller and a board, and always has a better texture when you buy it, it's like all the cards are stack against it, I don't do pie crust I buy them, quite happily from the store. The long rolled up ones, nut the in a aluminum pan kind. In fact I will make my own pumpkin puree, but not the crust.

The other thing that bothers me is the bottom crust never cooks, and apple pie is a double crust, there's blind bake option here, you have to use raw dough, the solution? Cast iron. A pie pan so hot, nothing would dare not cook in it. Since I switched, I've even gotten color on the bottom. That's unheard of. But it happens, and there is nothing like an apple pis where the crust is a perfect supporting character and not a disruption.

As to the actual cast iron pan, I love how this particular pan is orange, and therefore somehow more presentable that the black kind. I got this one when my grandmother moved a few years ago, but I took a quick look around and there are a couple options out there, the Le Creuset and the slightly larger and more affordable Rachael Ray pan, If you don't own a cast iron skillet I highly recommend having one, nothing browns like cast iron, and as long as you keep it well-oiled it will last pretty much forever.

So to start defrost pie crust. 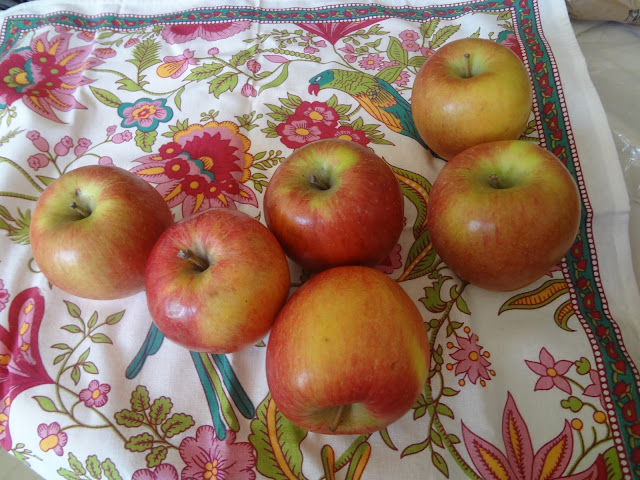 Cast iron pans are large, mine is 10 inches, which means 6 apples, which seem like a lot, but really isn't. 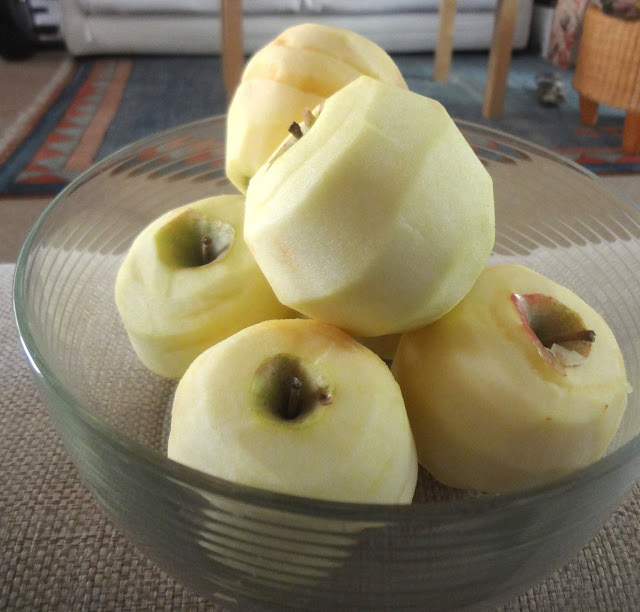 Peel six beauties, these are galas, I am aware that everyone uses Granny Smiths, but i happen to like the red apple take on pie, it's a little more mushy and you need less sugar, but I just like doing it that way.

Slice the apples are thin as you like, I like them a little larger, but really thin is also great, it's like there's more caramel than stewed fruit.

Add sugar, flour and cinnamon. You can also use nutmeg, (I can't, can't stand it.) lemon, juice, soaked raisins, or even some chopped pecans.

Let it sit and hang out till the flour has dissolved.

Place one crust in the pan. Top with apples, and then top with small spats of butter all around on top of the apples. 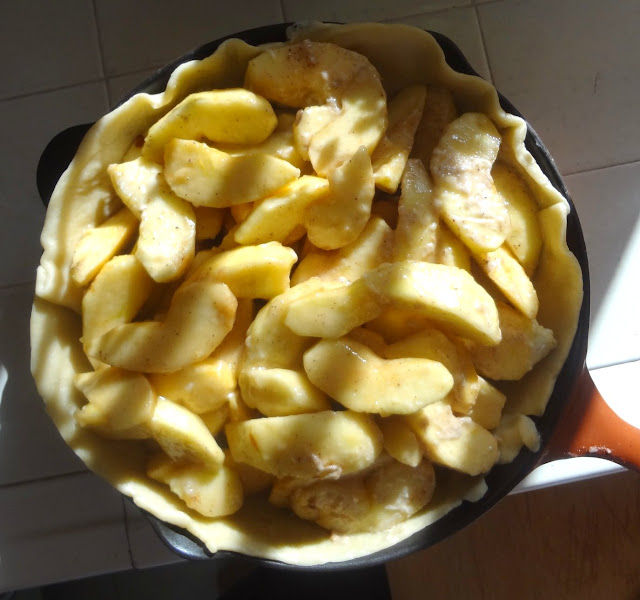 To connect the two layers you really have to have nothing on the edge hanging off like with a traditional crust, it will burn, badly. so tuck it all in, placing the top layer on top of the bottom one and pushing them together as much as you can, any decorations you want to do, you can also long as it's within the rim of the pan.

Break an egg and make a wash with a little water (1 tsp) Spread evenly on top of the pie. 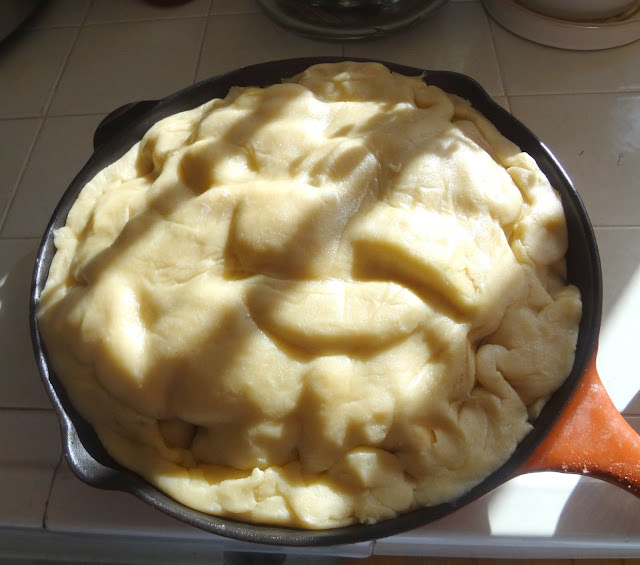 Bake at 425 for around 50 minutes, Place your lightest in color and weight half sheet on the rack below your pie. 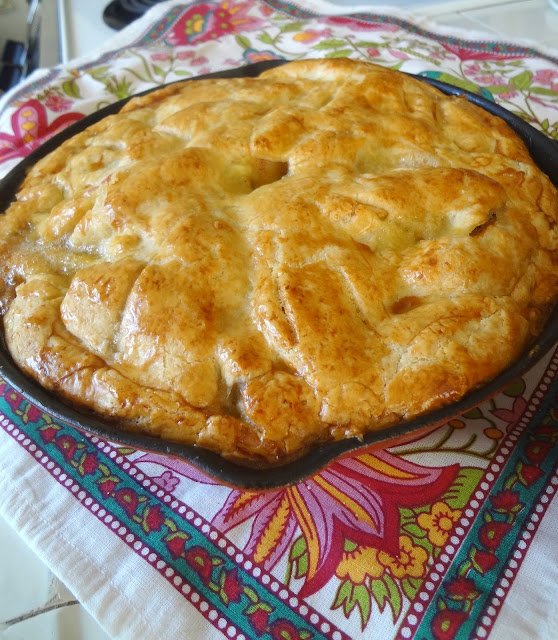 Check after half an hour and make sure the browning is going well, you may need to check again in ten minutes if it's on the brown side top with some foil. 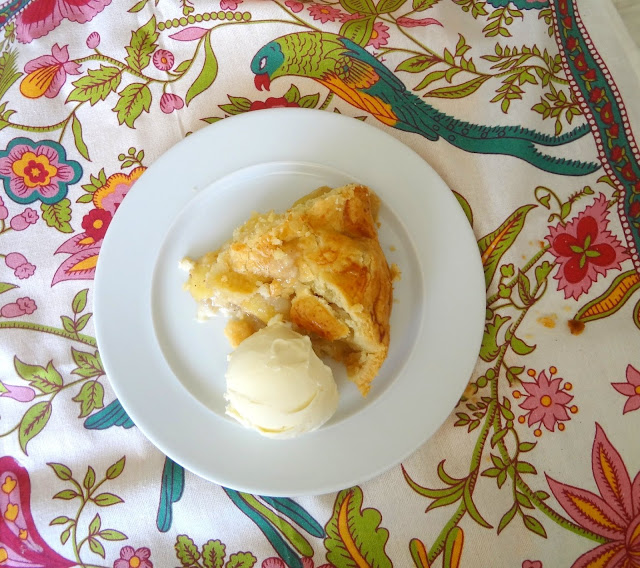