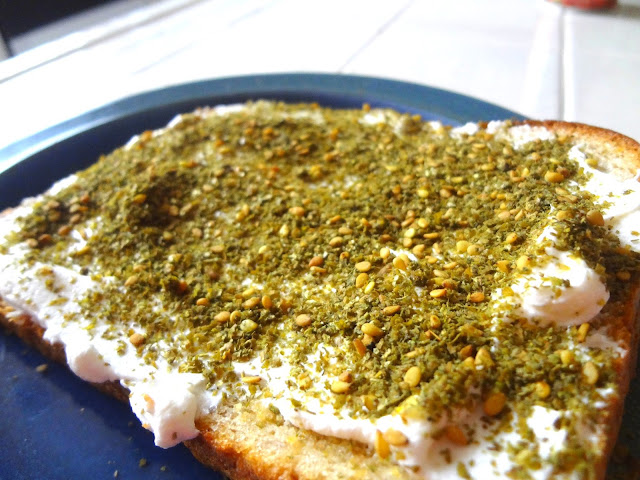 There's nothing like a breakfast that takes seconds, with only 3 ingredients, and tastes so complex, it's sour earthy, creamy and comforting all at once. Plus the if you buy just a little za'atar it lasts so long, this breakfast has an almost permanent place in the kitchen without taking up a lot of space.

This is based off a middle eastern bakery item called meneish, it's great, especially fresh, but not very accessible.

Za'tar is a combination of dried herbs, sesame seeds, sumac, and usually a little salt. It's often served mixed with olive oil, but it's a little heavy with all the oil, yogurt lightens it up, brings out the sour tones, and brings in a creaminess.

When buying za'atar, look for something more green in color, there are variations that are more brown, but the green has a better flavor profile, (in my opinion) it's fresher and lighter in flavor.

How to make this, I like to use non-toasted bread, top it off with strained yogurt and then za'atar, try not breathe hard, laugh, sneeze, that kind of thing the za'atar just flies off.