What but it's not Wednesday?

on July 05, 2012
Ok, so I delayed this week's Wednesday post to Thursday, since yesterday was fourth of July and all, it felt appropriate. Santa Monica has it's fireworks show on Saturdays, there was an incident years ago I think on the pier, and they stopped doing July 4th fireworks, which means that you really wont see much from where I live, in fact, I didn't even notice that it was after 9 til like 20 past, you can't even hear them apparently.

This last week has been crazy, I have barely gotten everything put together again, the company I work for finally shut down, and we were all officially laid off. It had been a long time coming, but was still shocking when it happened. It means I'll get to spend more time working at Predator, it's volunteer, but it's more my kind of marketing, so I'll be alright, and it also means I get to look for a new job, but with my best friend's wedding coming up in the middle of it all, it will be sort of messy, I may have to give a later start date. 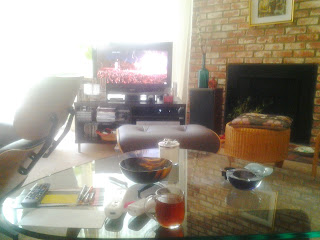 The EuroCup final was nuts, almost not worth watching, a final ending 4-0, that is crazy. I flipped channels a little just after watching and there was also a Wimbleton match and it was the second day of Tour de France, all of Europe didn't know what to watch, and American sports fans were left with some unconventional choices.

I'm thinking of starting composting, my cousin is really into composting, a bit of an expert, she's actually started residences (thanks to her summer internship last year) internationally, as well as some of the local green corporations in Santa Monica, I had been put off by the idea of having a jar in the kitchen, but I asked and I can totally put things directly into the bin outside, and if you're worried there is not scent, there really isn't I have sat on her balcony multiple times where she has more than one setup and nothing, you can't tell. I will blog about it when I start, it's all cool and sciencey balancing out the carbon and nitrogen cycles for the ultimate results, I will try to keep it all much more simple though.

Came across this guide to free concert series in LA for the summer recently If you're interested. This is definitely the summer for free events. That and library books.

This is also a summer where we are going to go back to our vegetarian lifestyle, when my sister was at Berkeley, we were vegetarians for quite a while. It was a cost cutting measure, it's so much cheaper to eat veg. I will occasionally buy a little ground meat, some stock and there's still some fish in the freezer and some tuna in the cupboard, so it wont be 100% vegetarian blog, but it will definitely start looking like one.