What it's Wednesday already? 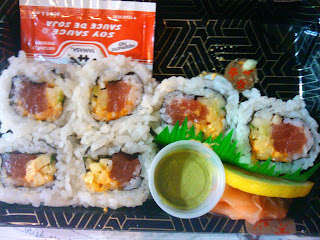 What is it about even supermarket sushi that makes it look so happy? This was lunch on Friday.


My sister's birthday yesterday, I made her a cake, which we will eat tonight, it's all extra chcoolately the way she likes it. Saturday was my half sister's elementary graduation, I remember graduating elementary, we did it midday during the week in the cafeteria, and signed each other's yearbooks after that. (My first yearbook) There were 89 of us, they gave us fake leis and some punch and that was it. No cap and gown, no long drawn out thing, the only people attending were my mother and grandmother. This weekend was more well. 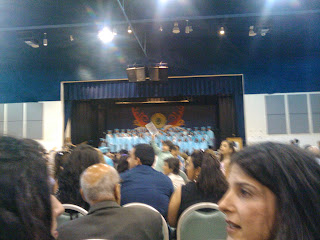 The trick to attending any Armenian assemble wherein children entertain is to sit as far from the speakers as possible. The children are instructed to scream into the mic so everyone can hear, sit far far away.

Yesterday was the primary elections, nothing too exciting on the California ballot this June, November will be much more exciting, I found myself eyeing the people voting for the other party, fortunately there were more people waiting on my side of the tiny garage.

Finally got a new phone, I haven't taken any pictures with it yet, but hopefully some of the weaker blog photos will now improve. Plus, no crashing, jamming, dying over and over, battery charge lying, and program killing, cross fingers, yay. Yes. It's an Android again, every iphone person I have ever met has said I should get one, but my tablet is an Android, and I'm used to them by now, hey I stuck with motorola for years despite it's impossible menu, which I somehow understood from years of only knowing it.

Still no updates on the trip, I am going, and now thinking I'll delay flying out the Cyprus by a few days, and fly out from London to maybe Sweden, I haven't been there before, always wanted to go, and can add another country to the list, no longer have the number of countries I've been to is the same as my age, and I would need to visit three new places to do that, which isn't too likely. There are far too few places left where I have friends, but haven't been to. I think Lebanon is the big one, but seeing as how two of them will be in Greece this summer... eh another year. Perhaps I'll get lucky, and the next time I'm in the area, maybe it will be politically calmer. (Says the person going to Greece.)