Tortellini Soup with the Tonys

on June 11, 2012
Soup really zombies? Really? It's June, and there is no gloom for once, (well actually this morning...) But here's my pathetic excuse, I wanted to watch the Tony's. That's right, I watched them, and I haven't seen a single show nominated (unless there was a movie for it, then maybe) SO here's my excuse for that I have two, I thought about this for quite a while last night while watching. The two reasons I like that show, first off the setting is their medium, so they can all perform on stage, live audience, and so the entertainment doesn't rely primarily on the host's jokes. Second, the Tonys are awarded by a clap-o-meter, I think more so than any other show, which means I can almost always predict the winner a couple of seconds before they announce, and I love correct predictions.

So soup, I really felt like tortellini soup and as summer approaches the chances of eating some decrease. I knew it was now or never,
What's great about it, is it really takes around 7 minutes to put together, first set the water to boil (in the kettle is faster)
I like dried tortellini, a little undercooked, the cheese has a sort of strange crunch when you undercook it, sort of like a cheesy chip in the middle of pasta, so amazing, I'm surprised the refrigerated stuff sells. I like Barilla, there's no other way of saying that, the brand is superior, I know supermarket brand I am endorsing here, but it's just true. Plus, the last time I was in Italy (9 years ago now) the supermarket shelves were filled with blue boxes, and I find that somehow comforting.

Anyhow, boiled water, around 3 cups, to a small pan, (I turn the stove top on to get it nice and hot before I do this)  add a nice big tablespoon of bouillon, (will not tell you the brand this time, I did enough endorsing for one day) top it off with a little olive oil, a splash of vinegar and a pinch of chili flakes, Let boil for 5 minutes, and done, see round 7 minutes. I often top with a little extra cheese. 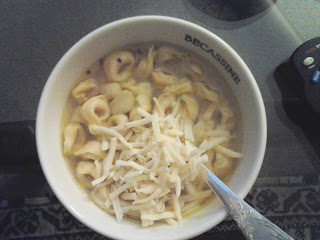