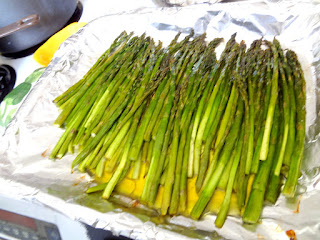 Asparagus may be my favorite vegetable, well it would be if it wasn't for Swiss chard... I love them roasted and slightly charred, and completely undercooked and practically raw. But slow cooked I hadn't had, and it's sort of in it's own little world.
This was made by my aunt,  at this point I feel I need to distinguish between aunts, so I can give credit to them, individually. Which means there should be Aunties named A, D, H, K, R, S,  and T, four of whom are actually blood relatives, the other three are a part of my greater family (I use their last name initials to avoid letter overlap)... So this was made by Auntie S, the stalks were broken off at the snapping point, and some of the first few peeled, until her daughter decided, quite rightly, snapping was sufficient. The asparagus was then placed on a baking sheet, topped with lemon, olive oil, salt and pepper and baked at 350 (low for veg) for a total of 25 minutes (It was started at their house and finished at mine)
The result was very tender soft asparagus, that could literally be wrapped around a fork.