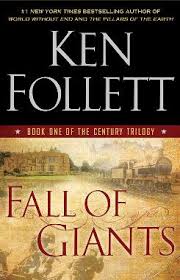 My first reaction to this book, was it is way too long. After which I saw the cover that claimed it was part 1 to a 3 part series. I don’t normally read 1000 page books, and when I do, they usually are a collection of volumes, but nevertheless, bored 2 weeks ago today, I picked the book up and gave it a go.
This is a page turner, and the beginning is great, the book had me hooked very quickly, and I really enjoyed the first couple of chapters, but there are problems, oh so many problems. Character depth is one of the big ones, they don’t have much, they have so little in the way of flaws. One flawless character we can take, but there are so many here. It was sort of like a old sitcom, everyone was basically good, slightly naughty at worst, you knew everything would be all right in the end, books about war shouldn’t have such a strong sense of security, they are supposed to break our hearts and the characters. There was so little drama, there was the content and sometimes a character felt sad or angry, but we heard it through their train of thought, not through their actions. nothing really made me nervous, it simply didn’t.
As far as history is concerned, I learned a great deal, especially since I had never understood how WW1 had started. For some unknown reason I felt I knew Russia rather well, and had a good understanding coal miners in Wales, but there wasn’t the same detail to the battle fields, to Paris, to London, or Washington, or anywhere else. I strongly suspect the consultants tor those areas were the best informed. So much more could have and should have been done here, if the same character goes from a small town in Wales to Cardiff or London, certainly to battlefields in France, their eye for detail should remain the same, their thoughts should convey it all to us, everywhere he goes. That was disappointing.
Spoiler alert:
Note to Author: Next people, kill people, have things not work out, hearts broken, we should see the hate, some characters should scare us, Violence, some anyhow. There should be immoral characters, and stupid mistakes, horrible outcomes, and add another 20 consultants, nail the history in every situation, make the characters consistent by making their reactions consistent.
Recommend to others: Yes, with reservations
Buy Fall of Giants